A WOMAN FROM FRANCE?

The French Broad River. Where does that name come from? And no, it has nothing to do with a woman of French heritage and dubious morals. Typically rivers and streams here in the southern Appalachians are small, fast, and cold. When several of these mountain streams come together they form a river that can be wider, slower, and warmer. There are two of these wide rivers in the western North Carolina area. The early European settlers in the area called them “broad” rivers. One of the broad rivers drains the eastern side of the Appalachian chain and flows into the Atlantic Ocean. It was named the English Broad, as it flowed through territory claimed by the English. The “English” has been dropped and is now known simply as the Broad River. 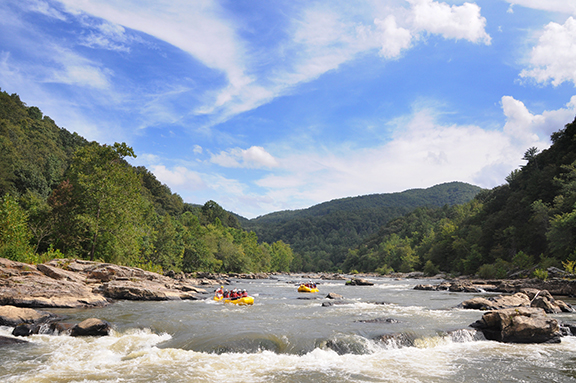 The Broad River starts in the Blue Ridge Mountains near Asheville and flows south until it is damed and forms Lake Lure. It leaves lake Lure and heads to South Carolina. When it reaches Columbia SC it joins with the Saluda River to form the Congaree River. Twenty-five miles south of Columbia the Congaree and the Wateree River merge to form the Santee. The Santee then heads southeast, making its way to the Atlantic Ocean between Charleston and Myrtle Beach.
The other broad river is the French Broad River. It drains the western side of the Appalachians and starts near Rosman NC where the north, east, and west forks merge. The north fork starts high in the mountains near Devil’s Courthouse and the Blue Ridge Parkway. The French Broad then cuts through the mountains on its way to the Gulf of Mexico. It flows into an area that was claimed by the French, thus the name “the French Broad River”. The fact that the river cuts through the mountains has given rise to the theory that the river was in place before the mountains were formed. The Appalachian Mountains were formed by the collision of continental plates when North America and Africa were connected and part of the super-continent known as Pangea. The Appalachians are actually related to the Atlas mountains in Morocco. The theory states that as the plates collided, and the mountains rose, the river continued to flow, cutting a path through the mountains, rather then going around them. The Appalachians are considered to be among the oldest mountains in the world making the French Broad one of the oldest rivers in the world. The path cut through the mountains by the river proved beneficial to humans as it created a pathway from one side of the mountains to the other. The Native Americans used this pathway and called it the Cataba trail. The European settlers took over the trail and called it the Buncombe Turnpike (Buncombe County).
The Cherokee called the river “Long Man” and the many tributaries “his chattering children”. They had different names for different stretches of the river. Upstream of Asheville it was called Zilicoah. Below Asheville, and the stretch of river we do our whitewater rafting on, was called Tahkeeosteh which translates to “where they race”.
After Rosman the French Broad flattens, slows and starts warming up as it travels north and east to Asheville. At Asheville it still travels north but turns to the west as well. The geology changes a bit and the river valley gets steeper and narrower. This is the stretch of river with the most rapids and where we run our rafting trips. Just past Hot Springs, NC the river leaves the narrow canyon and widens and flattens as it enters Tennessee and heads to Knoxville. The French Broad picks up more volume from the Nolichucky and Pigeon rivers near Newport TN, and then at the confluence with the Holston River, it becomes the Tennessee river. At Knoxville the river dives southwest into northern Alabama. At Guntersville Lake it turns northwest, clips a little bit of Mississippi, then heads straight north through western Tennessee into western Kentucky. At Paducah KY the river enters the Ohio River. After a short, ten mile visit with the Ohio River the waters that started so long ago high in the mountains of western North Carolina enter the mighty Mississippi. After a brief stop in New Orleans for some good Cajun food and jazz the French Broad and her new friends the Mississippi, the Ohio and the Tennessee end  their journey in the Gulf of Mexico.
I can imagine the waters that once flowed cold and clear out of the Appalachians catching their breath in the Gulf for a bit before evaporating, turning into water vapor, then heading northeast on the way back home to the mountains, where rain drops will form and fall along the Blue Ridge, starting the long trip all over again.

experienced guides, a lifetime of memories.