Most of our rafting trips start in the community of Barnard North Carolina. Barnard is quiet now and we like to say "some people live hear, but most people don't", but 150 years ago there was a lot of activity and commerce going on in Barnard. And hundreds of residents.  There was a stagecoach / drovers road along the French Broad River and Barnard was one of the towns people would stop at as they traveled from one side of the Appalachian Mountains to the other. 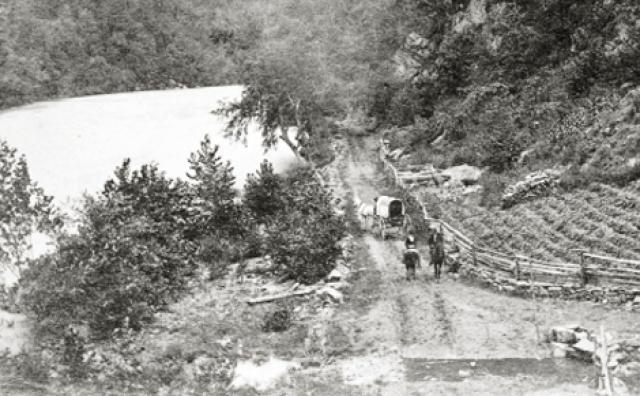 Back when the area was being settled by Europeans, most folks were farmers and getting their products to Eastern markets was an arduous and dangerous ordeal. One lucky break these farmers had is the fact that the French Broad River cuts across the Appalachian Mountain chain forming a relatively level, natural pathway from one side of the mountains to the other. This pathway evolved from an ancient Cherokee trading path and game trail known as the Catawba Trail. This pathway provided the farmers, and the Indian corn they grew in the mountains, access to the markets in the eastern plantation country, where the focus was on cash crops such as cotton, indigo, cane, and rice.
In 1819 the state of North Carolina hired an engineer to build a road from Asheville to Charleston SC, and a turnpike along the French Broad River from Greenville TN to Greenville SC. These improved roads gave farms from not only Western North Carolina, but also from Tennessee and Kentucky access to Eastern markets. Farmers discovered that the best way to get their corn to market was to feed it to their hogs, cattle, ducks, and turkeys. In the late fall of the year farmers would gather their fattened livestock for the trip to markets in Charleston and Augusta, Georgia. This trip could take up to two months. Men called drovers and their helpers would travel six to twenty miles a day, depending on the type of livestock they were driving. I guess turkeys and ducks moved slower then hogs and cattle. Every 8-10 miles the drovers and their livestock would find a “stand” where animals could be fed and penned, and the drovers could find shelter and food. Marshall was one of these “stands” . And although the road was used by all sorts of traffic, it gradually became known as the Drovers Road.
The improvements to the road through Buncombe County were begun in 1824 and completed in 1827. Buncombe County was much bigger then and the turnpike was 75 miles long and considered to be the finest road in North Carolina. It led from the South Carolina line, through the Saluda gap, across the Asheville plateau, down the French Broad River gorge, to Warm Springs (now Hot Springs) and then to the border with Tennessee at Paint Rock. At this point it became the Tennessee Road.
All the territory within miles of the road benefitted from the increased traffic with a massive increase in the numbers of livestock being driven to market. It is estimated that between 150,000 and 175,000 hogs passed along the road each fall, forming and almost continuos line of hogs from Tennessee to Asheville. What a smelly mess that must of been, and it really wore down the road. With the increased traffic came an increase in the demand for corn. More forest was cut and farms got bigger. Bigger farms required more laborers. This meant more slaves were brought into a region of the South that historically did not have that many slaves.
During the civil war traffic on the road dwindled. The road did, however, provide easy passage for Union Troops, as well as former slaves trying to get to Tennessee. The Civil War had a devastating effect on the road with many farmers killed or crippled. Railroads were destroyed and the numbers of livestock decimated. Western North Carolina, like most of the South, entered a period of economic depression. While traffic on the turnpike continued, it never regained its pre-war numbers. When the railroad reached Asheville in 1880, and then extended to Tennessee, livestock could be transported by rail in a fraction of the time and with much less weight loss for the animals. The stock stands were no longer needed and simply disappeared back into the environment. Some of the stands had grown into towns and there are still some remnants of their existence to be seen. Such is the case in Barnard. There are still cool, old buildings standing in Barnard. They are a reminder of the not so distant past when life along the French Broad river, and in these old mountains was very different.

experienced guides, a lifetime of memories.